These will shock you! They’re easy to do, but SUPER non-intuitive!

While it’s true that the evidence against multi-tasking is overwhelming, it is an unfortunate truth that most workers today, and definitely most Scrum Development Teams, work on several different things every workday, switching between tasks many times each day, and losing more and more time doing it.

Here are five steps you can take as a manager or ScrumMaster to help your Development Teams get better at focusing (in other words, NOT multi-tasking):

Reduce the Size of the Product Backlog Items

This reduces complexity which allows the Development Team to work together and reduces the amount of work in process. Lower work in process means fewer interruptions. Some other resources you can find on Artisan Agility include:

Don’t do More Than the Work Actually Requires

When it comes to building a product – writing code, updating documentation — sometimes we write code to make it easier to read, sometimes we write and rewrite documentation to make it better. A good DONEness definition and clear standards (coding, documentation/style, naming, data, testing) can not only help the team do what is necessary to create results that are production ready, but can also help the team to not do MORE than necessary (often called “gold-plating”). Other resources you can find on Artisan Agility include:

Most workers need to check email and make phone calls. In the name of flexibility, however, a lot of people leave their email opened on their desktop and check it every time an email arrives. This creates interruptions throughout the entire day. Instead, try this: at the beginning of the day, schedule a couple times during the day where you plan to check emails and then plan the rest of your work in 90-120 minutes blocks (around already scheduled meetings, of course).

Here’s a day from my calendar last April: 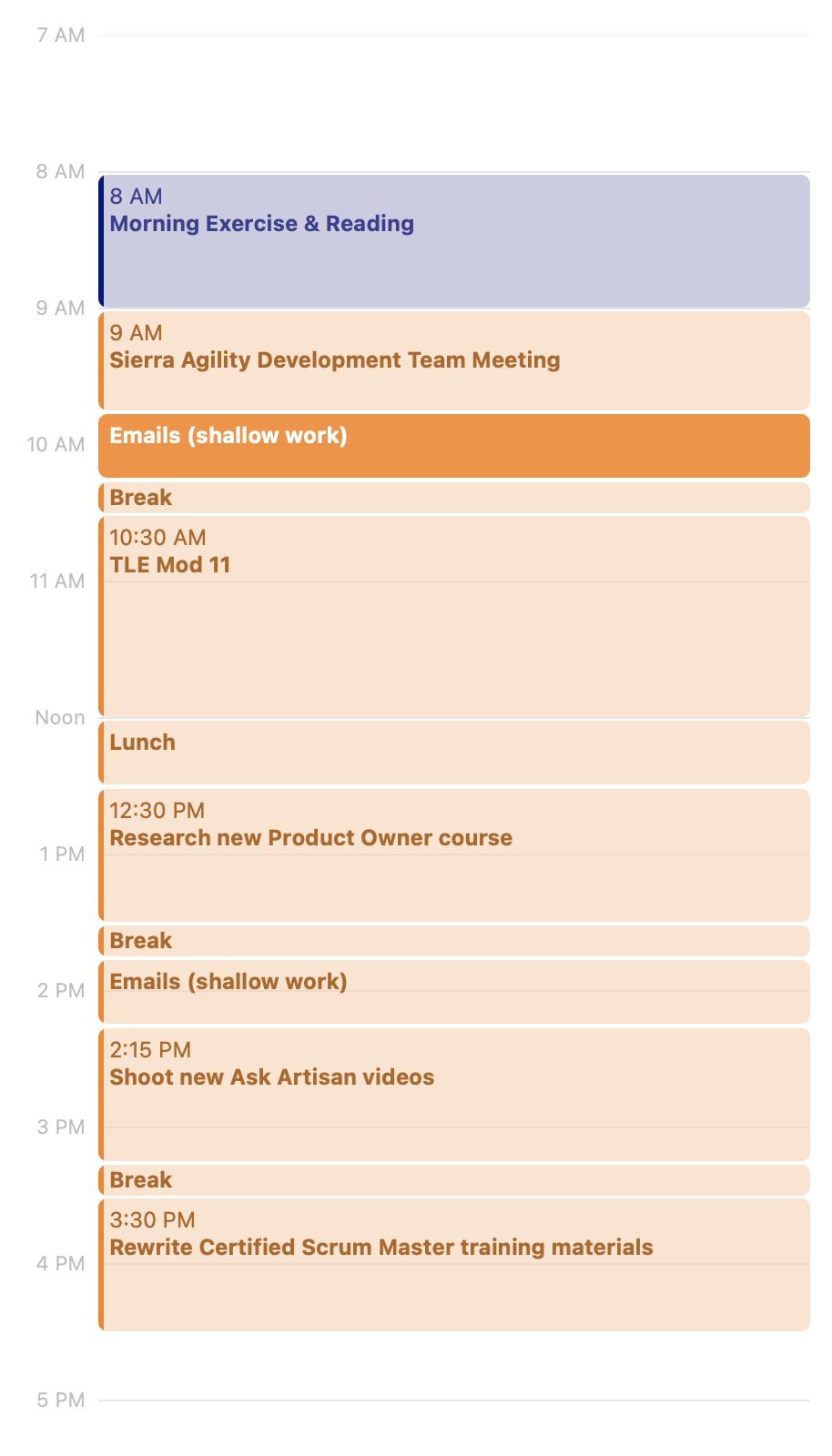 My work days mostly begin the same way with exercise and reading. Notice, however, that the rest of the day is made up of timeblocks between 60 and 90 minutes along and with short breaks in between. In addition, checking email is allocated to dedicated (and short) timeblocks of its own.

As long as you are planning your day (see the previous step), make sure that the things you do first are of the highest priority. When you get the most stressful things done first, you’ll find the rest of the day is easier to manage.

Reduce Your Work in Process to ONE

Consider the work of psychologist Gerald Weinberg who concluded that each extra “context” you switch between wastes 20%-80% of your total productivity.

Focus is an important value in the Scrum framework. By taking steps to improve the focus of your developers, you can go a long way toward improving the productivity of your team and the happiness of the team members. Other resources available on Artisan Agility include:

Swipe this FREE DOWNLOAD to supercharge your PBI refinement.

Normally available ONLY to Artisan students, we’re offering this handy guide to you for a limited time!

Backlog refinement is crucial to your scrum team’s productivity!

This guide is normally reserved for our students, but it’s available for a LIMITED TIME.

Ready for a chance of pace? This #AskArtisan video doesn't talk about Scrum or Agile, but YOU and your state of mind, productivity, and time management!

How Should a Scrum Team Handle Defects in a Sprint? #AskArtisan

Even ScrumMasters who follow #AskArtisan videos will encounter Unplanned Defects, which are critical to address immediately and can be challenging to deal with!

How Do I Choose Sprint Length? #AskArtisan

How do ScrumMasters set the length of a Sprint? It’s a trick question - Sprint length is determined by the entire Scrum Team! Why and how? Glad you asked!

Should I Lengthen a Sprint to Get More Done? #AskArtisan

As a ScrumMaster, have you ever been close to the end of a Sprint and realized that there's more work left than time? Oh no! Should you increase Sprint length?

How Many Teams Should a Product Owner Have? #AskArtisan

How many Scrum Teams should a Product Owner (CSPO) work with at once? The Scrum Guide is very clear, so in this #AskArtisan video, let's sort it out!

How Many Teams Should a ScrumMaster Have? #AskArtisan

ScrumMasters with more than one Scrum Team have a few things to look out for to ensure their multi-tasking isn't affecting the team's effectiveness.

How long should it take to plan a Sprint? In this #AskArtisan video, I’ll explain what is and isn't important for your Sprint Goal.

Sprint Goals: Why the Plan Matters Less Than You Might Think

This information will help you take a BIG step toward having product dev, service, and support teams be self-managing. (Yes, really!)

Sprint Goals: The Key to a Well-Executed Sprint

About the Author: Jim Schiel

Jim is an accomplished author and former manager at Siemens Medical Solutions. Jim's career highlights include managing various development teams ranging in size from 5 to 155 developers, instituting iterative project management processes, and improving product quality, development performance, and customer satisfaction. He's been coached by many thought leaders in the Agile space, including Bob Martin, Jim Grenning, Mike Cohn, Ken Schwaber, and Esther Derby. He started Artisan Agility in 2009, and is the author of "Enterprise Scale Agile Software Development" (published in 2009), and "The ScrumMaster Study Guide" (published in 2011).

This site uses Akismet to reduce spam. Learn how your comment data is processed.